Jen Does Sustainability... and Mongolia!

Jen Does Sustainability... and Mongolia!

Bond Hair Religion in Kingston, Canberra, is home to many things – great hair offerings, stylish décor, a warm, passionate team, an insanely driven and generous leader (we’ll get to her) and an impressive trophy cabinet, which shines even brighter now following the announcement of the ActSmart Business Sustainability Awards in Canberra.

The salon picked up the Small Business Award, which means that Bond Hair Religion is also home to a very effective sustainability plan. And owner Jenni Tarrant nabbed the big one – the Minister’s Award for Leadership. 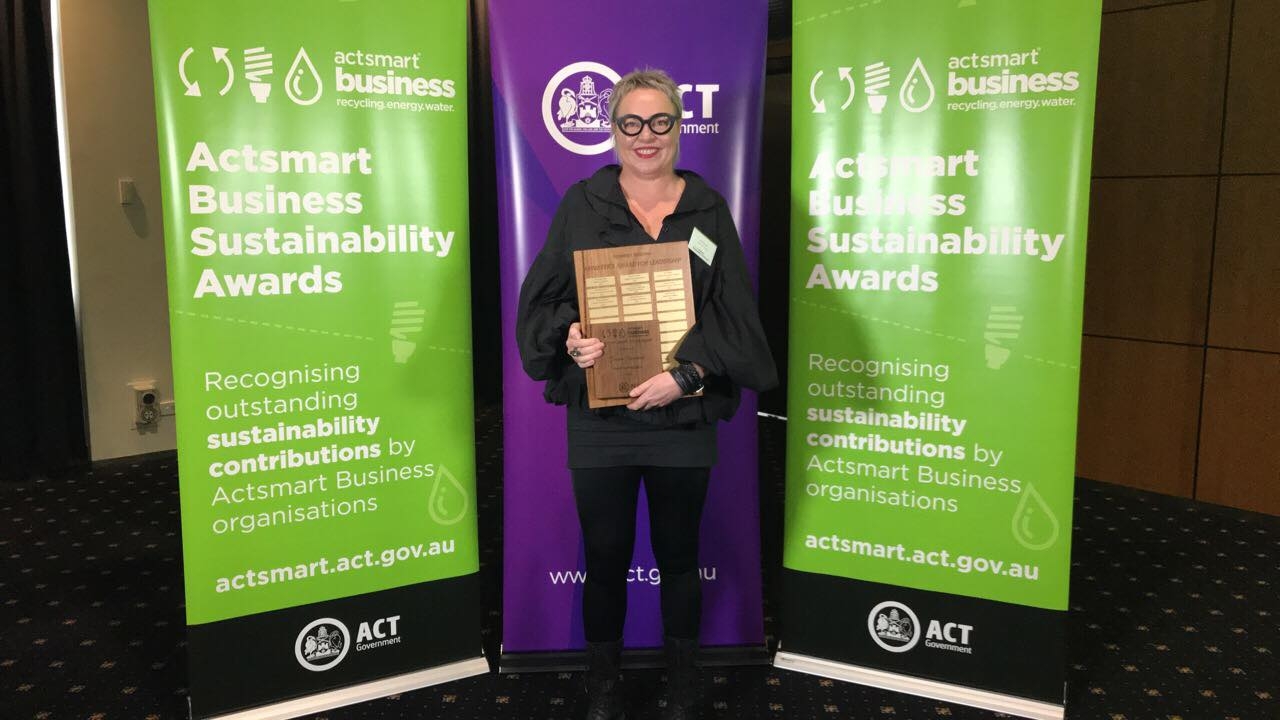 But four years ago, it was a very different story at Bond – Jenni had just joined the ActSmart Business Sustainability Program and put the salon through its rigorous initial audit.

“The most staggering result was that our waste was 100% landfill!” Jenni states. “I knew we weren't exactly focused on sustainability, but to have done so poorly was still quite a shock. As an overachiever, this result did not sit comfortably with me at all, so it very quickly became a priority in the business.

“Then Sustainable Salons came our way! The timing was perfect, and I've never looked back.”

Jenni says once she’d established core sustainability values in the salon, the decision-making process around every new opportunity became pretty easy – either it fit with Bond’s value of being environmentally- and community-friendly, or it didn’t get through the door.

The Sustainable Salons program takes care of the plastics, metals, paper, hair, chemicals, tools, razor blades and other unexpected items that may come through the salon, while also providing sustainably-minded solutions for every day salon items via its Members Only Rewards Shop. And that’s where Jenni went into over-achiever mode.

The salon’s backroom houses Easydry biodegradable towels, saving 100% of its previous water usage; the towels are also used as cleaning cloths before they’re discarded, giving them a second life before they hit the Earth to break down. Along the same lines, Bond has also introduced the Showa 100% Biodegradable Gloves, which are rinsed and used multiple times. Eco Heads are fitted at the basin, LED lights illuminate throughout, Refoil replaces supermarket foil that’s made from virgin materials, the water-only Ekoworx cleaning solution keeps the place looking fresh, coffee beans are purchased in refillable bags and all paper magazines have been replaced by iPads.

“I’m pretty proud of this one,” Jenni notes. “Instead of an entire cupboard full of current magazines that get updated weekly to monthly, all 16 stations have iPads with lots of digital magazines on them as well as Netflix.”

And that’s still not all.

Jenni is an activist by nature, and a strong believer in encouraging her clients to chart the same path when they visit the salon. 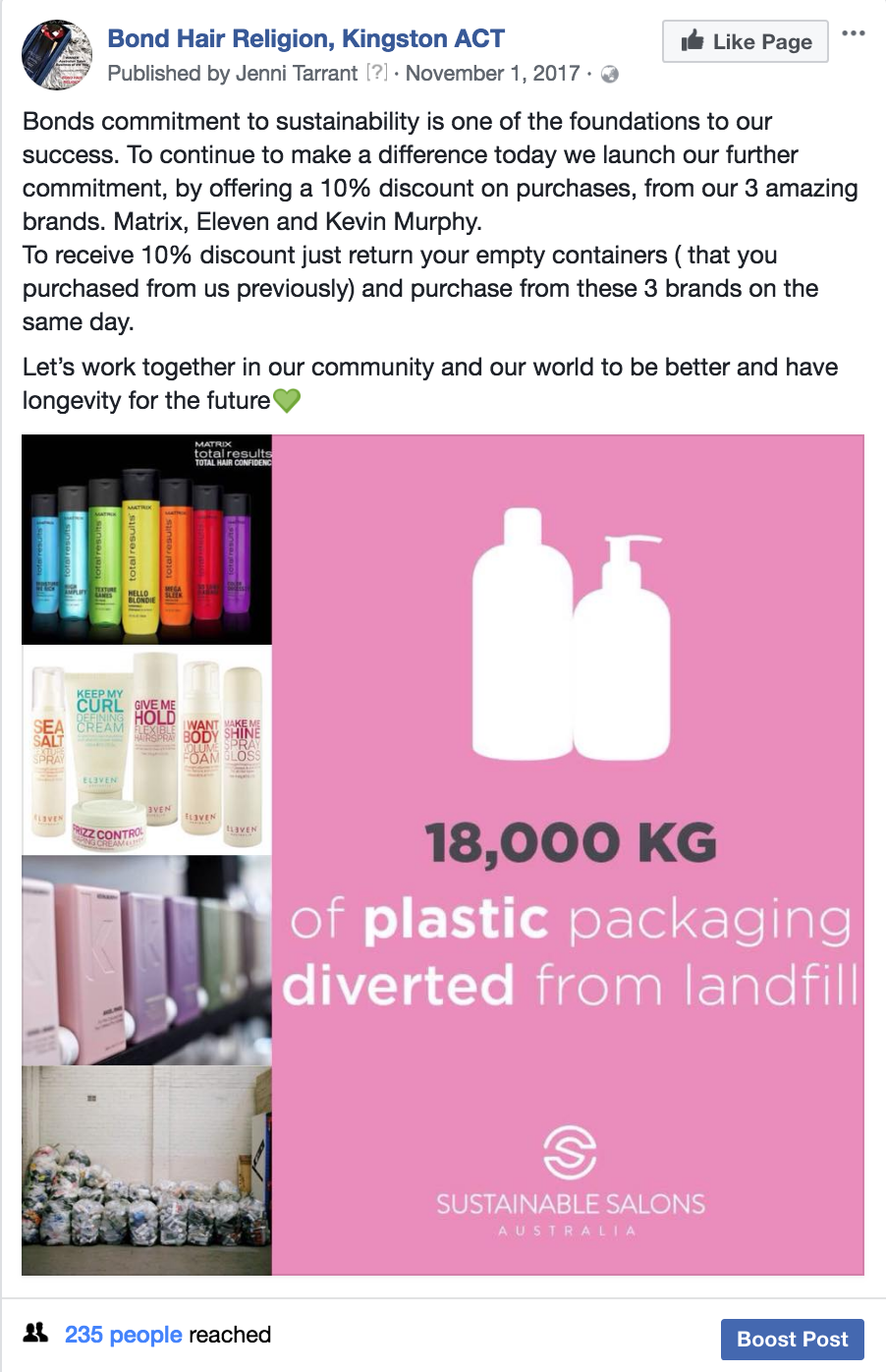 “We invite clients to bring in their empty product bottles for recycling to receive a 10% discount on their next purchase. Plus, we encourage them to take home used Easydry towels for their worm farms or to use as weed matting in their gardens!”

And with solar panels next on the agenda, is it any wonder that this green powerhouse was top of the tree in the ActSmart awards?

“I was absolutely stunned,” Jenni says. “As I sat there and listened to all the initiatives of different businesses, I was blown away by the commitment to the environment and the innovation that passionate people come up with in their businesses.

“I thought we may have a good shot at the Small Business category, but I wasn't even thinking about the possibility of winning the Minister’s Leadership Award.

“This is a big win for small business owners who wear a lot of different hats and don't have people designated to departments like bigger companies do. Bond Hair Religion is the first small business in nine years to have won this award… I am very proud of it.”

Although the environment is an overt passion for Jenni, perhaps her most recognised trait is her incredible dedication to making a difference in the ‘people’ space. The character ‘Patch Adams’ comes to mind when picturing her immense zest for life and preference for the unorthodox approach (and humour!).

As a child Jenni suffered mental, physical and sexual abuse. At 14, she began hairdressing, which she says changed her life. “I realised that my past will never stop my desire to make the world a better place – it ignited me to help others.

“Four years ago, I decided to use my business as a tool for knowledge and a community of giving.”

And her pledge has not been compromised. Since that day, Jenni has completed Kokoda, climbed Kilimanjaro for a cause, raised funds and awareness for Lifeline’s Helpline by taking a vow of complete silence for a week (in a hairdressing salon… let’s all take a moment to let the degree of difficulty sink in), and her team has cut hair for the homeless and orchestrated collection drives for those in need.

Jenni has also thrown her mighty determination into raising funds for cancer support and research, a battle that’s always been painfully close to home having already watched her dad and grandparents fight for their lives. And when the bombshell dropped recently for her sister – and Bond’s Salon Manager – Jules, who was diagnosed with a rare form of blood cancer, Jenni took her focus up a notch.

In March this year, the Bond team raised a staggering $6,173 during the Leukaemia Foundation’s World’s Greatest Shave campaign. And now Jenni plans to ride a horse around Mongolia for 8 days to support “one amazing charity, one incredible family and one individual”. 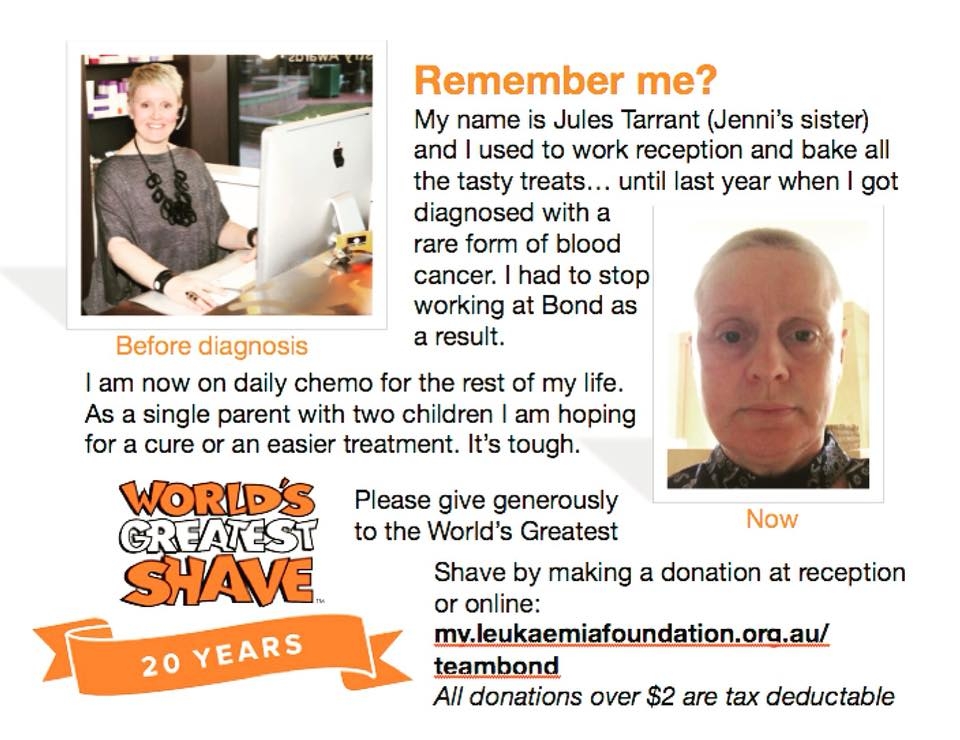 “Can I tell you, at no time do I actually like doing any of these physical challenges,” Jenni admits,


“but people love to give money when you’re so outside your comfort zone! And this is definitely outside of mine.

“I am petrified of horses… I have no idea how to even get on one! I’ll be staying in yurts with nomadic families that travel around with their goat herds. There will be no power, no showers, no toilets, I’ll be eating local cuisine of meat boiled in yak blood while sharing an alcoholic beverage of fermented horse milk (fermented with horse wee!).

“Hopefully this gives you a clearer idea of my determination.”

Funds raised will go to charities Love Your Sister and Maya’s Rest, and Coral – a NSW woman living without a pancreas. Jenni’s fundraising will help Coral purchase a $10,000 automatic pump that will be connected to her body to regularly administer insulin.

“WE HAVE RAISED $96,000 IN FOUR YEARS FROM OUR CLIENTS, FAMILY, FRIENDS AND THE AMAZING HAIRDRESSING INDUSTRY.”

Earlier this year, Jenni’s efforts were honoured at the Australian Hair Industry Awards, where she was presented with the Vidal Sassoon Humanitarian Award.

“One of the reasons I have achieved more success than I could ever have imagined is that I have a philosophy of improving something every day. It took many years to be comfortable in my role as a leader and business owner, particularly as I still work full time on the floor. Once I felt some mastery over these difficult challenges, I then focused on different 'projects' to ensure I was improving.

“I know that it is really challenging to implement more systems when you already feel overwhelmed and time poor, however the benefits that come with being innovative and doing the right thing more than make up for that little bit of extra effort.”